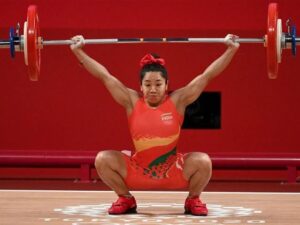 Tokyo Olympic silver medallist Indian weightlifter Saikhom Mirabai Chanu won a gold medal with a combined lift of 201kg in the Women’s 49kg final at the ongoing Commonwealth Games 2022 in Birmingham on Saturday.
Mirabai added one more gem to her crown and took home the gold as she added another medal to India’s tally on day 2 of the CWG with a total of 201kg.
In her first attempt at the Snatch category, Mirabai made a great start and successfully lifted 84kg. Mirabai successfully lifted the required 88kg in her second. She performed her personal best at the level of representing India. In the final attempt of the Snatch category, the Tokyo Olympics silver medalist failed to lift 90kg with exhibiting stunning power.
Mirabai created a new Commonwealth Games record by lifting 88kg in her second attempt in the snatch round