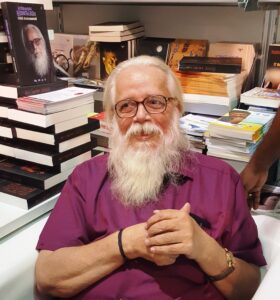 A group of former ISRO scientists on Wednesday alleged that the claims made by ex-ISRO scientist Nambi Narayanan in the movie ‘Rocketry: The Nambi Effect’ and through some television channels, were false and amounts to defaming the space agency.
Dr A E Muthunayagam, Director, LPSE, ISRO; Prof E V S Namboothiri, project director, cryogenic engine and D Sasikumaran, the Deputy Director, cryogenic engine, and other former scientists from ISRO on Wednesday met the media here to “debunk” the claims made in the movie.
Directed, produced and written by actor R Madhavan, the biographical drama is based on the life of aerospace engineer Nambi Narayanan. Madhavan also plays the lead role in the movie.
“We are forced to tell the public certain matters as Nambi Narayanan has been defaming ISRO and other scientists through the movie Rocketry: The Nambi Effect, and also through television channels. His claims that he is the father of many projects is false. He even claimed in the movie that he once corrected A P J Abdul Kalam, who went on to become the Indian President. That is also false,” the former scientists said.
They also said that they have asked the current chairman of ISRO S Somanath to take a decision on the false claims made in the movie.
The scientists said that Narayanan’s claim in the movie that his arrest had led to a delay in India acquiring cryogenic technology was wrong.