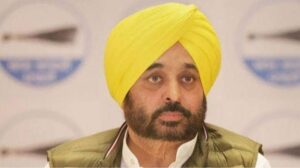 Punjab Chief Minister Bhagwant Mann on Wednesday extended a warm welcome to Prime Minister Narendra Modi and described as “unfortunate” the January 5 incident when the PM had to return without attending an event in Ferozepur.
PM Modi on Wednesday inaugurated 300-bed Homi Bhabha Cancer Hospital and Research Centre at Mohali’s Mullanpur on the outskirts of Chandigarh.
On January 5 this year, the prime minister’s convoy was stranded on a flyover due to a blockade by protesters in Ferozepur. After that PM Modi returned without attending any event, including a rally. Later, the Supreme Court had even appointed a five-member committee to probe the alleged security breach.
Addressing the gathering on Wednesday, Mann described the cancer hospital as a big gift by PM Modi to the state.