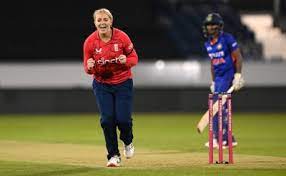 London :Despite the absence of stalwarts such as regular captain Heather Knight, veteran seamer Katherine Brunt and all-rounder Nat Sciver, England thrashed the Harmanpreet Kaur-led India by nine wickets in the opening Women’s T20I at the Riverside Ground here late on Saturday to take the lead in the three-match series.Riding on an unbeaten half-century from Sophia Dunkley (61 off 41 balls), England overhauled the meagre target of 132/7 for the loss of just one wicket — Danni Wyatt (24) — in just 13 overs to complete the mauling of the visitors.After leg-spinner Sarah Glenn wrecked India’s innings, returning figures of 4/23 — her best figures in T20Is — on a wet Durham ground, Dunkley anchored the chase, smashing eight boundaries and a six as the hosts cruised to victory with 42 balls to spare.Dunkley, who was lucky to survive several calls, recorded her second half-century and the highest score in the format. She also shared partnerships of 60 and 74 with Wyatt and Alice Capsey respectively.This was sweet revenge for England who lost to India in the Birmingham Commonwealth Games.