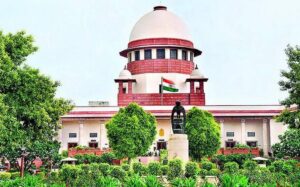 The Supreme Court on Monday adjourned the hearing of a batch of petitions challenging the Citizenship (Amendment) Act, 2019 and posted the matter for further hearing on September 19.
A bench of Chief Justice of India UU Lalit and Justice S Ravindra Bhat was hearing at least 220 petitions challenging the CAA.
The pleas against the CAA first came up for hearing in the Supreme Court on December 18, 2019.
CAA was passed by the Parliament on December 11, 2019, after which it met with protests all across the country.
The CAA came into effect on January 10, 2020. A Kerala-based political party Indian Union Muslim League (IUML), Trinamool Congress MP Mahua Moitra, Congress leader and former Union minister Jairam Ramesh, All India Majlis-e-Ittehadul Muslimeen (AIMIM) leader Asaduddin Owaisi, Congress leader Debabrata Saikia, NGOs Rihai Manch and Citizens Against Hate, Assam Advocates Association, and law students are several among others who had filed the plea before the top court challenging the Act.