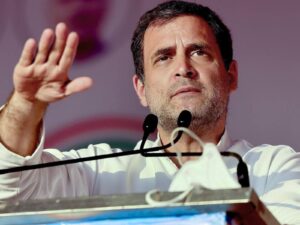 Amid the ongoing speculation over Congress presidential elections, V Hanumantha Rao believes Rahul Gandhi would be the most suitable leader for the Congress president’s post.”As Rahul Gandhi is touring across the country, he knows the problems of the poor. Rahul should be president of the Congress party,” said Rao.Ashok Gehlot and Shashi Tharoor’s names have been at the forefront for the post.”Rahul Gandhi is doing a padayatra for 3,500 km and children, elders, and all are participating. This is not a normal thing. Rahul Gandhi’s family gave their lives for the country,” he added.Rao slammed the Modi government over the exponential price hike in all essential commodities and the GST imposed on milk.He added that “it is the time when a young leader like Rahul Gandhi who is kind-hearted like Indira Gandhi and Rajeev Gandhi looks after the poor people should be made the president.”As Rahul Gandhi is touring across the country, he will better know the problems of poor people. You walk in the front and we are with you, said Hanumanth Rao.