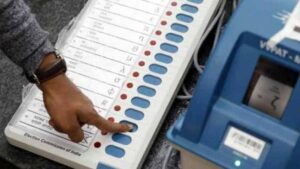 A voter turnout of 63.14 per cent was recorded in the first phase of Gujarat Assembly elections covering 89 seats across 19 districts of Saurashtra-Kutch and southern regions of the state, the Election Commission said on Friday.
In the 2017 Assembly election, the voter turnout in the first phase covering the same 89 constituencies stood at 66.75 per cent.
Polling for the first phase, in which the electoral fate of 788 candidates was locked in Electronic Voting Machines (EVMs), was held on Thursday.
Tribal-dominated Narmada district recorded the highest turnout of 78.24 per cent, followed by Tapi, another such district with 76.91 per cent. Navsari recorded 71.06 per cent voting, the EC said.