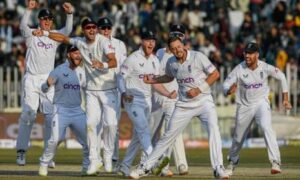 England defeated Pakistan by 74 runs in a thrilling first Test of the three-match series at Rawalpindi Cricket Stadium on Monday. Guest skipper Ben Stokes won the toss and opted to bat first. England scored 657 runs in their first innings that included a world record of 500 or more runs in the first day of a Test match. Meanwhile, Pakistan put a good total of 579 in response. In their next innings, England declared at 264 for 7, setting a 343-run target for Pakistan before the chasing side was bundled out for 268.
Ben Stoked, said, ‘Stokes: Some of the things we can’t plan for is what happened to the squad before the Test. Seems a long time ago when we were running around to find players for the Test. Will Jacks getting the message three minutes before toss, and Pope getting the gloves. We’ve played 8-9 matches with myself and Brendon in charge. One thing we try to do is focus on ourselves and not the opposition. We know we’re a very exciting team. Was a great batting surface, so it was an opportunity for our batting group. Having the lads truck in like they did today was amazing. Really special group of players. We wanted to come here to Pakistan and carry on with our mantra of exciting cricket. I’ve got no interest in trying to play for a draw, the dressing room has no interest in playing for a draw. Felt on this kind of wicket, almost had to entice the batsmen to play an attacking shot. Today we were fortunate to get the ball reverse-swinging. James Anderson and Ollie Robinson were fantastic today. We won probably about 8 minutes before we would’ve come off. This is probably up there as one of England’s greatest away wins.’