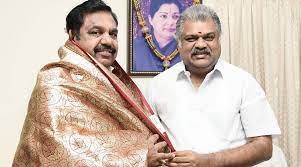 Chennai: Tamil Maanila Congress president G.K. Vasan on Friday announced that his party has accepted the request of the AIADMK, the principal party in the alliance, to contest the byelection for the Erode (East) Assembly constituency, which will take place on February 27.

In a statement, Vasan said the decision was made with the welfare of the Tamil Nadu people and that of TMC’s alliance partners in mind. The present political situation, and the Parliamentary and Assembly elections ahead, were taken into consideration, the party said.

Pointing out that the AIADMK expressed its interest during a meeting its leaders had with him on Thursday, he said TMC’s decision was made after consultation with the party’s senior leaders. He said that TMC cadres will work towards AIADMK’s victory.

The bypoll was necessitated following the demise of Congress MLA E Thirumahan Everaa, in the 16th Assembly of the state. The DMK allocated the seats to Congress to honour their electoral pact. However, it is going to be the proxy battle between AIADMK and its arch-rival as the Dravidian majors would use their resources to the optimum level to settle the political scores and a prelude to the 2024 Lok Sabha polls.

Tags:Tamil Maanila Congress president G.K. Vasan on Friday announced that his party has accepted the request of the AIADMKthe principal party in the allianceto contest the byelection for the Erode (East) Assembly constituencywhich will take place on February 27.