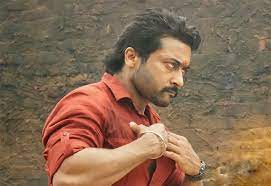 Suriya starrer Etharkkum Thunidhavan is all complete. Slated to release in February, 2022 it will have its teaser out in New Year.
Etharkkum Thunindhavan is set to be a mass entertainer with a strong social message. Pretty actress Priyanka Arul Mohan is pairing opposite Suriya in the film.
It also has Vinay Rai, Sathyaraj, Saranya Ponvannan, Soori, M. S. Bhaskar Devadarshini, Jayaprakash, Ilavarasu and CWC Pugazh in pivotal roles. D Imman is composing music for the movie. Pandiraj is directing the film.

It will be the actor’s first theatrical release in the last two years, and fans are preparing themselves to have a massive celebration. Suriya will be seen in a rural look in the film.