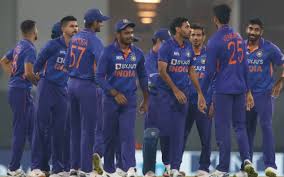 Dharamsala: After defeating Sri Lanka in the third and final T20I, Rohit Sharma-led Team India equalled the world record for registering the most consecutive T20I victories.

With this victory over Sri Lanka, Team India registered their 12th consecutive win in the shortest format and they have now equalled Afghanistan’s record for most consecutive T20I wins by a Test-playing nation.

India is currently the No.1 ranked team in the shortest format of the game. India won the third and final T20I match against Sri Lanka by six wickets.

For hosts, Shreyas Iyer starred with an unbeaten 73* as the Men in Blue chased the target of 146 within 16.5 overs. India never found themselves in trouble while chasing the underwhelming target of 146.

Shreyas trumped the chase with 73 no off 45 balls – his third successive half-century. Hosts dominated from the word go and chased down the target with six wickets and 19 balls to spare.

Earlier, Indian bowlers restricted Sri Lanka to the score of 146/5 in the 20 overs. For Sri Lanka, Dasun Shanaka again played a captain’s knock of 74* and took visitors to a respectable total while Dinesh Chandimal scored 25.

Avesh Khan scalped two wickets, while Mohammed Siraj, Harshal Patel, and Ravi Bishnoi grabbed one apiece.
Rohit, India captain, said, it’s a pattern of everything that comes together. We played very well. Lot of positives came out from the series. Want to understand what kind of bench strength we have. Good to give opportunities to those guys. Important to tell guys not to worry about your positions in the team. Want to fill whatever gaps we have. Keeping that in mind we want to move forward. Going to be a big challenge but always nice to have guys in form (whom to pick). Once we reach Mohali we’ll start thinking about the Tests.

Shreyas Iyer, Man of the Series said, ‘All three knocks were special, but yesterday’s – coming in at a crucial moment, I’d pick that. Only require one ball to get into form as long as you’re keeping your eyes on the ball and playing it on its merit. The wicket was little two paced today compared to yesterday. Was playing on the merit. Outfield is so fast, just had to hit gaps. Been a rollercoster journey after my injury. Real test of you is during rehab sessions.’

Shanaka, Sri Lanka captain, said, Want to congratulate India for a wonderful performance. Need some stitches on the hand (picked up the injury attempting a catch). Been tough without our senior bowlers. Didn’t capitalise on the first six overs today again with the bat. Pace attack has been outstanding throughout last year or so. Not so much about pace but control. This is international cricket, we have to adapt, can’t complain about conditions.