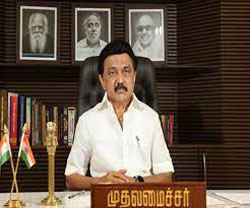 Chennai : The Tamilnadu government has announced that three DMK MPs, one MLA and four IAS officers would be deputed to bordering countries of Ukraine to bring back stranded students safely.

A decision to this effect was taken at a consultative meeting chaired by Chief Minister M K Stalin.

Four IAS officers will accompany them, the release said, adding, the team will coordinate with the Indian Embassies there and bring back the students from Tamilnadu who had gone to Ukraine and moved to these countries to escape from the Russian military attacks.

It said so far 3,025 telephone calls and 4,390 e-mails have been received from stranded students and based on this the details of 2,223 students were collected and sent to the External Affairs Ministry to enable them to rescue them and bring them back to India.

Stalin wrote to External Affairs Minister S Jaishankar demanding that clearances may be provided for the committee’s travel at the earliest.

Meanwhile, Tamilnadu BJP chief K Annamalai sought to know the need for the State government to send a delegation when ‘all resources of our government is at work to bring all our children home.’

He said: ‘Is this activity the domain of a state government? Ours is the only county operating at this scale to bring its stranded students by using all tools of diplomacy. The need of the hour for our TN government is to have teams meeting the parents of the students in TN and keeping them in good spirits and giving them the required confidence,’ he tweeted.