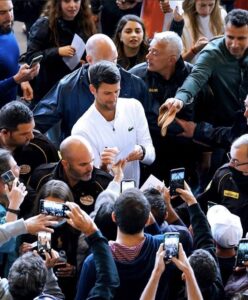 Madrid : Novak Djokovic feels like the hard work is starting to pay off. Trying to regain his best form after a slow start to the season, Djokovic looked sharp in his opener at the Madrid Open on Tuesday, defeating Gael Monfils 6-3, 6-2 to advance to a third-round match against Andy Murray.

‘I would probably rate it as the best performance of the year. I felt very good on the court,’ the top-ranked Djokovic said after saving all five break points he faced and converting the three he had against the 21st-ranked Frenchman.

It was the Serb’s 18th straight win over Monfils. The match was interrupted at 2-2 in the first set as rain forced the roof on center court to be closed. ‘Just generally very, very good performance,’ he said. ”I’m very pleased, considering, you know, that up to today I was not playing my best tennis in the few tournaments that I played this year and still kind of finding my rhythm, finding my groove.” Djokovic arrived in Madrid with a 5-3 record in the three tournaments he played. He had needed three sets in each of his last three victories this season, all in Serbia before losing the final there to Andrey Rublev.

‘I had a week, 10 days to get ready for this match, and for this tournament,’ he said. ‘I have done everything I possibly can to build my fitness and also improve on all aspects of the game, on the court.’ Djokovic played in only one hard-court tournament after having not been allowed to participate in the Australian Open because of his vaccination status. He lost to Jiri Vesely in the Dubai quarterfinals.

He also lost to Alejandro Davidovich Fokina in his opening match in Monte Carlo, which was his only other clay tournament this season. ‘I’m really glad that it paid off, because I felt good on the court,’ he said. ‘It’s the right process, and it’s the right direction.’ Djokovic, a three-time winner in Madrid, next faces Murray, a two-time champion in Madrid who continued his latest comeback with a 6-1, 3-6, 6-2 win over Denis Shapovalov. Murray, a former No. 1 player who has undergone hip surgeries in recent years, had won his first match on clay in nearly two years on Monday.

Teenage sensation Carlos Alcaraz kept his good run with a 6-3, 7-5 win over Nikoloz Basilashvili, staying on track for a quarterfinal encounter with idol Rafael Nadal. The third-seeded Nadal opens on Wednesday against Miomir  Kecmanovic. Earlier, Rublev reached the third round after rallying to a 2-6, 6-4, 7-5 win over 20-year-old Jack Draper of Britain.

The eighth-ranked Rublev is seeking his first Masters 1000 title. The win in Serbia last month added to his titles in Dubai and Marseille. Only Nadal and Alcaraz have also won three titles this season.

In the women’s draw, American Jessica Pegula defeated Bianca Andreescu 7-5, 6-1 to set up a quarterfinal encounter with Spaniard Sara Sorribes Tormo, who got past Daria Kasatkina 6-4, 1-6, 6-3 to reach her third WTA 1000 quarterfinal.