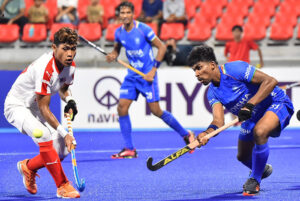 Bhubaneshwar : India settled for an epic 3-3 draw against Malaysia in a riveting Super 4s clash in the Asia Cup 2022. The second string Indian team were down and out, trailing 2-0 at HT but a stunning comeback saw on the cup of victory.

However, Raazi Rahim dashed those hopes late in the game as the two teams shared the spoils.

India had earlier defeated Japan 2-1 in their first match on Saturday.

Meanwhile in the other Super 4 league match, South Korea defeated Japan 3-1 to move to four points. South Korea had earlier drawn 2-2 against Malaysia in their first match.

Japan with two defeats have no chance of making it to the final while Malaysia (GD) 0 (5-5) have an outside chance if they can beat Japan by a comprehensive margin (minimum 2 goals) provided India and South Korea match ends in a draw.

On the day, Malaysia started brightly and put the Indian defence under sustained pressure.

Indian goalkeeper Suraj Karkera was brought to action in the sixth minute when he made a fine save to deny Muhammad Hassan’s reverse hit.

Malaysia earned a penalty corner from the resultant move but Karkera positioned himself perfectly to keep out Faizal Saari’s try.

It was all Malaysia in the first quarter as the Indian team failed to get a single shot on target.

Tags:Hockey: India settles for a draw