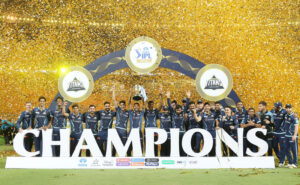 Chasing a modest 131 for victory in their debut season, Gujarat depended on a 63-run third-wicket partnership between Shubman Gill, who made 45 not out, and Pandya to achieve their target with 11 balls to spare in Ahmedabad. Gill and Miller ensured the debutants get past the finish line in the end. Earlier, Hardik Pandya took three wickets to restrict Rajasthan Royals to a modest 130/9 in 20 overs.

The Gujarat Titans skipper returned 3/17 in his four overs as Rajasthan kept losing wickets at regular intervals after electing to bat first. R Sai Kishore also added two wickets under his belt. The grand finale started with the closing ceremony featuring Bollywood star Ranveer Singh as well as iconic singer AR Rahman. The IPL also entered the Guinness Book of World Records for the biggest cricket jersey in the world.

Hardik Pandya, Player of the Match, said, ‘Wanted to show at the right time what I’ve worked hard for. Today was the day from the bowling point of view I saved the best for the best. Second ball of my spell when I got Sanju out, saw that if you hit the wicket hard and hit the seam something is gonna happen. All about sticking to the right lengths, asking the batters to play the right shots. For me my team is the most important. I’ve always been that kind of individual. If I were to have a worse season and my team wins, I’ll take that. Batting comes first to me, always going to be close to my heart. When we got the auction done it was clear I had to bat higher to guide.’

Batting coach Gary Kirsten, said, ‘ It’s fantastic, really happy for the guys, they’ve put a lot into the tournament, great for Ashish (Nehra) and Vikram (Solanki) as well. You’re looking for good balance, good depth in the auction but most importantly you’re looking for players who can do different roles, the one thing we’ve learnt with Ashish is finding guys who were versatile, and at 4, 5 and 6 – we’ve got that. (On different players winning Man of the Match) We all got energy out of it, we’ve had a great bowling attack – through the end we went a bowler strong and a batter light, but we were always confident, just to get good balance in the team.

Sai Kishore came into the team as a left-arm spinner and did really well as well. (On Pandya) He has been fantastic, I’ve looked working with him. He’s a high-profile player in India but he’s incredibly humble, wanting to learn as a leader and engage with his players which I thing is really, really important. He’s tried to help the youngsters, he’s come in and played a different responsibility.

You never stop learning as a coach, every IPL is a learning experience, that’s what I enjoy. I’ve loved working with Ashish, he’s really strong tactically – trying to put a gameplan together on the fly is not easy. There are so many variable in each game, but what I’ve enjoyed has been the responsibility players have taken to win games for us. (On playing in Ahmedabad) It is amazing to win in our first season. We came out here pre-season to do a bit of training and it was empty, you could hear an echo here, so it is great to come back and get a full stadium.’

Rashid Khan, said, ‘We assessed the wicket well, we knew it would be hard to chase down 150. Everyone had to take responsibility, we did well to come back well in the middle overs. He is the only guy whom we didn’t want to bowl to and I’m happy that he’s part of our team (on Shubman Gill), Biggest achievement of your career is to be part of a winning IPL team. You always want to do well in big competitions like this. Winning tournaments like this, you’ll need to put in a lot of hard work and this is certainly a high point of my career.’

Lockie Ferguson, said, ‘ I couldn’t be more rapped for the boys, finishing with a win. (On his fastest delivery) Very proud of the boys for the way they bowled. Hardik was superb too, he led from the front’