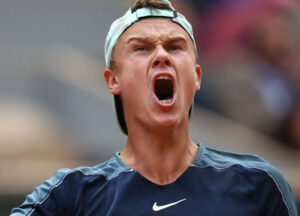 The last Danish man to reach the last-eight in any Slam was Jan Leschly at the 1967 US Championships.

With fellow 19-year-old Carlos Alcaraz already into the quarter-finals, it is the first time two teenagers have made it this far in Paris since Hendrik Dreekman and Andrei Medvedev 28 years ago.

Daria Kasatkina booked her place in the French Open quarter-finals for the second time on Monday with a comfortable victory over Italian 28th seed Camila Giorgi.

Russian Kasatkina, seeded 20th, took advantage of an error-strewn performance from Giorgi to win 6-2, 6-2 in only an hour and 20 minutes.

The 25-year-old broke into the world’s top 10 four years ago after reaching the last eight at both Roland Garros and Wimbledon before a slump in form.

I’m excited about the quarter-finals at Roland Garros, that’s the most important… Who the opponent will be doesn’t matter, Kasatkina said.

No.20 seed Russian Daria Kasatkina continued her ruthless form at Roland Garros, defeating No.28 seed Camila Giorgi of Italy 6-2, 6-2 in 1 hour and 20 minutes to reach the French Open quarterfinals.

Former World No.10 Kasatkina has yet to drop a set and indeed has conceded just 14 games in four matches so far. She has only lost serve on two occasions – neither to Giorgi, against whom she saved all six breakpoints.

The 25-year-old Kasatkina had not reached the second week of a Grand Slam since making back-to-back quarterfinals at Roland Garros and Wimbledon in 2018. But having slumped to World No.71 by the end of 2020, she has essayed a resurgence over the past two years.