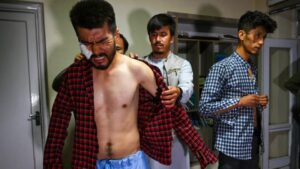 Kabul : Taliban forces in Afghanistan have beaten up a former reporter of Kabul News at a checkpoint of PD-5 Kabul city because he was wearing trousers, a local media reported. Taking to Twitter, Reporterly, a local media outlet in Afghanistan, said, “Reports indicate that Akram Esmati, former reporter of Kabul News, has been beaten up by the Taliban at a checkpoint in PD-5 of Kabul city, as he was wearing trousers. He said that the Taliban took his phone as well.”

This is not the first time when Taliban attacked the reporters. Earlier, the Taliban had arrested a Panjshiri journalist in Kabul while he was doing his job, local media reported amid the growing incidence of human rights violations in the country. Farhad Amiri’s family members said that they have no information about his whereabouts, Aamaj News reported. The news comes as relatives of human rights activist Maiwand Wafa told Aamaj News that the intelligence forces of the Taliban arrested him nine days ago.

Earlier in May, Khairkhah, a photojournalist and reporter with the local Subhe Kabul newspaper, disappeared from the Kote Sangi area of District 5 in the capital of Kabul, according to his nephew Mohammad Abbasi, who spoke to CPJ in a phone interview, and media reports. Khairkhah told his family that he was going to the area to report and would attend his evening university classes, his nephew said, adding that his uncle did not attend the classes and they could not find any information about him in the hospitals, police districts, or the Kabul police command. In a separate incident, on May 19, Naimulhaq Haqqani, the Taliban’s director of information and culture in western Herat province, told his personal assistant to expel Marjan Wafa, a reporter with the independent local Radio Killid station, from his press conference, according to CPJ. Wafa, the only female journalist at the press conference, reportedly was complying with the Taliban’s dress code by wearing a face covering that exposed only her eyes. Haqqani’s personal assistant did not give her any reason for the order to leave. Wafa’s expulsion came amid a broader crackdown on women reporters, with Taliban ministries ordering female TV journalists to wear masks while on air.