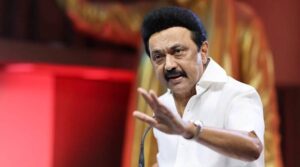 Tamilnadu Chief Minister MK Stalin today urged the Centre to withdraw controversial Agnipath scheme.
In a press release, he said, ‘I urge the Union government to immediately withdraw the Agnipath scheme, which destroys the defence service ambition of lakhs of youths, considering the security of the nation.’
‘Apart from political parties, veteran officers who had served in the armed forced for several years have stated that military service is not a part-time job and such (agnipath) recruitment would destroy the control in the army.’
The Union Cabinet approved a recruitment scheme called Agnipath for Indian youth to serve in the Armed Forces. The scheme allows patriotic and motivated youth to serve in the Armed Forces for a period of four years. Agnipath scheme entails a recruitment process for individuals with ranks below that of officers, with the goal of deploying fitter, younger troops on the front lines. The youth joining the armed forces under Agnipath scheme will be known as Agniveers.
Tags:MKStalin Agnipath Withdraw Military