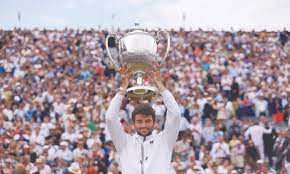 London: Matteo Berrettini retained his Queen’s Club Championships title with a straight-sets win in the final – becoming only the eighth player to win back-to-back trophies. Berrettini defeated world No.38 Filip Krajinovic 7-5, 6-4 in the final on Sunday at The Queen’s Club. The world No.10 also becomes the first player in the Open Era to lift the trophy on his first two appearances at the tournament.
Berrettini is the first player to win consecutive Queen’s Club titles since Andy Murray between 2015 and 2016. Every other player in history to defend the Queen’s title have gone on to become world No.1 and win a Grand Slam title. The Italian now boasts a 20-1 winning record on grass since the start of 2021 and is unbeaten this year having taken the Stuttgart Open title. He’s won three out of his last four grass events, losing only to Novak Djokovic in the Wimbledon final.
This year’s Wimbledon starts on June 27, with Novak Djokovic set to defend his men’s singles crown but there will be no defending champion from the women’s singles side as last year’s champion Ashleigh Barty retired in March. “To be honest, there’s too many emotions,” he said after being handed the trophy for the second time in his career.
“The last thing I expected was to come back from surgery to defend my title here at one of the most prestigious tournaments we have. I don’t want to cry but most of it is thanks to my team, my family, those who are close to me.” “Every time I walk in these hallways I see all the names of the champions past and present and now knowing that I’m going to be up there twice gives me goosebumps. I don’t think I could have asked for better preparation (for Wimbledon) – but this is Queen’s and I only came here to focus on defending my title and that’s what I did. This is the best surface for me and I love playing in the UK.”
Berrettini made the most of a weary start from the Serbian – racing to three break point opportunities – but Krajinovic targeted the Italian’s backhand to get a hard-earned opening hold. The world No.38 looked like he was in for a difficult afternoon with Berrettini launching 100mph forehand winners past his opponent. The Italian got his reward on the third time of asking, coming from 40-15 down to break Krajinovic with an inch-perfect backhand touch volley.
Krajinovic has had to fight hard to make his way to the final and wasn’t going to give it up easily. Berrettini gave up a break point off a poorly placed short ball and on his second opportunity, the Serbian issued some textbook grass court coverage as he glided to the net to fire away the volley winner. With the scores locked at 5-5 30-30, Berrettini picked his moment to come up with brilliant backhand half volley out of the Krajinovic’s reach and the Serbian eventually gave away the break with a shot in the net.
Berrettini continued to build momentum off his powerful groundstrokes and looked to have the championship in the bag after breaking to love midway through the second set. It’s been a fantastic week for Filip Krajinovic on his Queen’s main draw debut and he battled through to the end – putting pressure on Berrettini’s serve – but in the end the reigning champion just had enough quality to see through the victory.