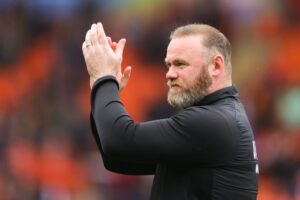 Leeds : Former Manchester United and England star Wayne Rooney has resigned as manager of troubled Derby as the club prepare for their first season in the third tier for 36 years.

Rooney was unable to keep Derby in the Championship last season after the crisis-torn club were hit by a 21-point deduction as punishment for financial issues.

In his first managerial role, Rooney impressively kept Derby in contention to avoid relegation into the final weeks of the season. That valiant effort had suggested the 36-year-old would be able to lead Derby to promotion from League One next season.

But with Derby remaining in administration throughout a turbulent close-season, Rooney has opted to quit the Rams with the new campaign starting on July 30.

Wayne Rooney has today informed Derby County Football Club that he wishes to be relieved of his duties as first team manager with immediate effect, a club statement said.

Rooney, Manchester United and England’s all-time leading scorer, took charge at Derby in 2020 and had a year to run on his contract.

The former England captain was linked with an emotional return to Everton as manager last season after earning widespread praise for his work at Derby.