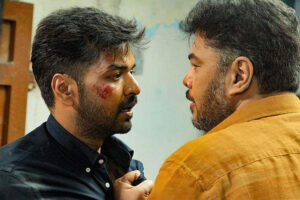 Badri, who is known for light-hearted films in Tamil.cinema,has opted to go the hard way in Pattampoochi.

It is a cat and mouse game between a psycho killer and a cop.

A re-investigation begins when a death row convict (Jai) facing execution reveals that he is an infamous serial killer and that he is only innocent of the murder for which he was convicted.

Sundar C is entrusted with the task of bringing out the truth and there is a journalist Honey Rose to help him out.

There is gore, bloodbath, killings all through.

Jai, who is known for his soft romantic and comicl roles, plays a menacing baddie. He is shown ruthless and heartless.

As a serial killer, he leaves an impact. Sundar C as cop does give his best.

He has enough opportunity to show anger, agony, desperation.

Honey Rose has a meaty role to play.

Imman Annachi has got apart to play.

A thriller about serial killings is short & crisp, but Badri could have executed it better.