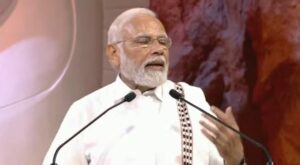 India’s sporting culture is becoming stronger due to energy of youth and enabling environment. Our talented youngsters from small towns and women bring us glory, said Prime Minister Narendra Modi.
Speaking at the inauguration of the 4th Chess Olympiad Chennai today, the Prime Minister said, ”There has never been a better time for Indian sports. We have won at Olympics, Paralympic, where we had not won previously. We have 44th Olympiad here in India today. Thousands are expected to participate at he 22nd Commonwealth at UK. There are no losers, there are winners and future winners. Wishing the best for all the participants.”
Sports has always been considered divine. The place at which it is happening is most fitted. In Tamil Nadu, you can find temple for Sathuranganathan. Even god played the game of chess. Tamil Nadu has a strong historical connection with chess, Modi said.
Olympiad has come to India for the first time. It is coming to Asia after three decades. On behalf of every Indian, I thank FIDE for this event, added PM.