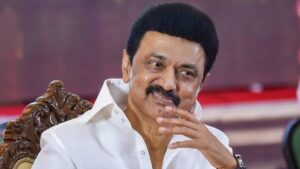 Parandur near Sriperumbudur which has been chosen as the site to construct the greenfield facility will be a game changer in the development of Tamilnadu, said Chief Minister MK Stalin.
He said, ‘the new greenfield facility to come up at Parandur will be a filip to achieve our target of one trillion economy’.
The welfare measures initiated by the Dravida model government has won the appreciation of everyone across the globe, he added.  It may be recalled that to a question raised by Rajya Sabha MP Kanimozhi yesterday, Union Minister of State for Civil Aviation VK Singh said that after comparing the viability and feasibility, including the presence of habitations and industrial establishments and the land acquisitions cost of both sides, the state government had shortlisted Parandur as the location for the development of the greenfield airport.