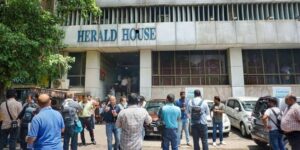 The Directorate (ED) on Wednesday sealed the National Herald office, instructing that the premises are not opened without prior permission from the probe agency. The probe agency took action a day after the Enforcement Directorate (ED) carried out raids at 12 locations in the national capital and at other places in connection with the National Herald case in which top Congress leaders are accused of violating norms. “Delhi Police blocking the road to AICC Headquarters has become a norm rather than an exception! Why have they just done so is mysterious…,” Congress leader Jairam Ramesh said. The National Herald case pertains to the alleged financial irregularities under the Prevention of Money Laundering Act (PMLA) and was registered about nine months ago after a trial court took cognisance of an Income Tax department probe carried out on the basis of a private criminal complaint filed by former Bharatiya Janata Party (BJP) MP Subramanian Swamy in 2013