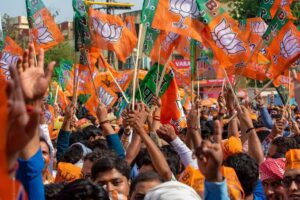 Former Haryana Congress leader Kuldeep Bishnoi joined the BJP on Thursday along with his wife Renuka Bishnoi here in the presence of senior party leaders, including state Chief Minister Manohar Lal Khattar.
Bishnoi, son of former chief minister Bhajan Lal, has been an MLA for four terms and MP for two terms while his wife is also an ex-MLA.
Khattar welcomed him into the party at a ceremony at the BJP headquarters and said his induction will help the organisation.
He noted that Bishnoi has been supporting Prime Minister Narendra Modi’s leadership and backed the BJP during the recent Rajya Sabha polls despite being a Congress MLA.