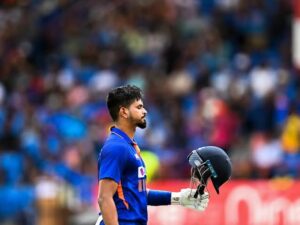 Shreyas Iyer roared back to form with a stroke-filled 64 while the spinners picked up all the 10 wickets as India recorded yet another one-sided 88-run victory over West Indies to wrap up the five-match T20 International series by a comprehensive 4-1 margin.
Hardik Pandya, India skipper, said, It’s very special feeling to get a chance to lead your country. Obviously on then winning the game means a lot to me. Captain Ro did everything well before this game, so I just ensured that we kept doing the good work. (On captaincy) Why not? If given a chance, I’ll be more than happy to do it. But for now, we have a World Cup coming, it’s about getting better as a team. The kind of talent the players we have and the freedom we’re getting, this is the New India. I can see players playing with freedom and not worrying about failing. And when you do that, you tend to do special things. I wanted to give Axar the ball early because he is used to bowling in the powerplay, he is capable of holding his own and then with the wrist spinners, I knew we could get the wickets. It’s about how we can get better from here. Preparation-wise we’re ready for the World Cup but in this sport, you never stop learning. So it’s about learning with each game.
Nicholas Pooran, West Indies captain,said, We were just not good enough. We didn’t learn from our mistakes. We just weren’t up to the challenge, just didn’t put enough partnerships. To come up against tough teams, we need to be good in execution. Be it in the batting group or bowling group, we have a lot of catching up to do. I just hope that we as a team learn from these losses. We’re building towards the World Cup and hopefully we can do that right. (On Holder opening the batting) Obviously King and Mayers didn’t play today, so we needed someone to open. Just thought of giving him an opportunity to bat higher up. We all know what he can do down the order. It (playing two spinners) is something we have to think about in the future. India have shown why they are better than us in this series.
Arshdeep Singh,Player of the Serie, said, Feels really good. As Rahul (Dravid) Sir says, we are a team. We are just looking to do the process properly, not thinking too much about the results and that’s what is helping me in my bowling. It’s about being adaptable (as a bowler) and a lot of credit goes to the team management for giving me clarity. The way the youngsters are being backed is nice, the feel of the dressing room is really good. Helps as a youngster to come in and do whatever you do in your IPL teams/State teams.