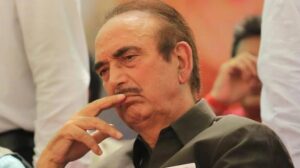 Former Congress leader Ghulam Nabi Azad is all set to launch his own party and its first unit would come up in Jammu and Kashmir within a fortnight, his close confidant GM Saroori said today. Saroori asserted that the restoration of the pre-August 5, 2019 position of Jammu and Kashmir will be part of the party’s manifesto.
A former minister who was among several prominent Congress leaders of Jammu and Kashmir who resigned from the basic membership of the party in support of Azad, Saroori said their leader was ideologically secular and there was no question of him working at the behest of the BJP.
He also claimed that hundreds of senior Congress leaders, Panchayati Raj Institution members and prominent workers have tendered their resignations after the former chief minister ended his over five-decade-long association with the national party.
“Azad is coming to Jammu on September 4 to hold consultations with his well-wishers before the launch of our new party,” Saroori, a former vice-president of the Jammu and Kashmir unit of the Congress, told Press Trust of India.
Hours after his resignation on Friday, Azad said he would launch a new party soon and that its first unit would be set up in Jammu and Kashmir.