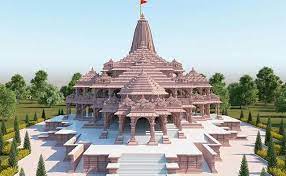 The construction work is going on at a good pace and the temple will be ready for ‘darshan’ by devotees in December 2023, he said.

The Shri Ram Janmabhoomi Teerth Kshetra is a trust that has been set up by the Centre for the construction of the temple.

According to the trust officials, a huge foundation is being laid in the soil to ensure the temple’s longevity and stability for at least a thousand years.
Talking about other civic work, they said a rectangular, two-storey parikrama road will be constructed, enclosing a total of eight acres of land including the area of the temple and its courtyard, and in its eastern part, there will be an entrance made of sandstone. White marble from the Makrana hills in Rajasthan will be used inside the sanctum sanctorum of the temple, they said.

Tags:Shri Ram Janmabhoomi Teerth Kshetra general secretary Champat Rai here said the construction of the Ram temple in Ayodhya will be complete by December next year.