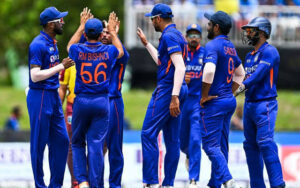 When Team India take to the field to play Hong Kong in their second Asia Cup 2022 match in Dubai on Wednesday, a direct qualification to the Super Four phase will be on their mind.
Hong Kong will be starting their campaign at the event. On the other hand, India is heading into the match with a huge advantage not only because of its star power, but also because they defeated arch-rivals Pakistan in their opening clash by five wickets.
India should not take Hong Kong lightly and keep their previous clash against the side in their mind. India had won by a mere 26 runs after posting 285 runs on the board, the last time these teams locked horns in Asia Cup 2018.
Despite a win, India was tested by Pakistan. Its top order consisting of Rohit Sharma, KL Rahul and Virat Kohli appeared vulnerable once again. They will have to be at their absolute best and this match against an associate team will be their chance to regain their form. India’s middle order consisting of Suryakumar Yadav, Rishabh Pant, Dinesh Karthik, Hardik Pandya and Deepak Hooda has been reliable for a while now.
They will have to keep the consistency going, especially when the top order is not at its best. A lot of attention will be on Suryakumar Yadav, Hardik Pandya and Ravindra Jadeja. The Indian bowling attack performed superbly against Pakistan in their campaign opener.