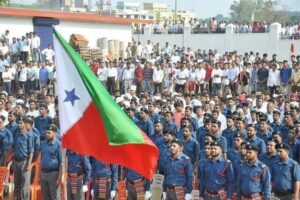 Office bearers, members and cadres of the Popular Front of India (PFI) along with others were involved in radicalizing and recruiting Muslim youth to join proscribed organisations like ISIS, the Nationa Investigation Agency (NIA) revealed while seeking remand of the accused arrested a day ago in its first-ever mega operation against the outfit.
The counter-terror agency also accused the PFI leaders and cadres of “conspiring and raising or collecting funds from within India and abroad for committing or getting committed terrorist acts in various parts of India including states of Kerala, Tamil Nadu, Karnataka, Uttar Pradesh, and Delhi”.
“In pursuance to the conspiracy, the accused persons are also involved in acts preparatory to the commission of terrorist acts using weapons, with an intention to strike terror in the minds of the general public,” the NIA informed a special court in written citing its First Information Report it registered April 13 this year as per direction of the Ministry of Home Affairs (MHA).