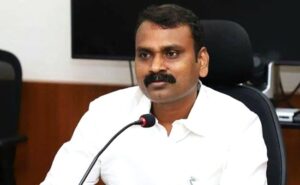 Chennai: Paying tributes to Mahatma Gandhi and Kamarajar on their respective birth and death anniversaries on Sunday, Union Minister of State L Murugan backed RSS against the left parties.The BJP leader belonging to TN paid rich tributes to Gandhi and Kamarajar. He said, “If the downtrodden were able to study, it was due to Kamarajar’s mid-day meals scheme. His rule was a ‘golden period’ for Tamil Nadu.”Echoing the ideology of Mahatma Gandhi, the minister encouraged people to buy khadi products and urged people to maintain cleanliness.