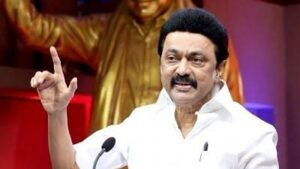 Chief Minister M K Stalin filed his nomination to contest elections to the post of DMK president today. With no other nominations likely to be filed, Stalin will be elected unopposed as the president of the Dravida Munnetra Kazhagam for a second tenure at the party’s General Council meeting, scheduled to be held on October 9.
Stalin was chosen as the DMK president on August 28, 2018, following the death of the incumbent and his father M Karunanidhi on August 7. The DMK, after Stalin took over as its president, registered successive electoral victories in 2019 and 2021 bringing the party back to power in Tamil Nadu after a decade.