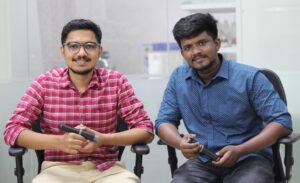 Chennai : Two Bangalore based Engineering students, Arjun B S and Ajay Krishnan A, have been announced as ‘National Winners’ of the prestigious James Dyson Award 2022, for their unique innovation EpiSHOT – a reusable epinephrine autoinjector for patients suffering from a severe and potentially fatal systemic allergic reaction that occurs suddenly after contact with an allergen.Arjun says, “Allergies are prevalent among the Indian population, but no one believes that a simple allergic reaction could be life-threatening if not treated immediately. India, till-date, does not have an immediate solution to anaphylaxis, which shows preponderance for the age group 20 – 40 years. Due to existing market monopolies, huge price tags of single-use autoinjectors and safety concerns for self-use, there remains a greater need for a safe and cost-efficient solution. EpiSHOT aims to bridge this gap. The challenge of developing such a much-needed device was given to us by Dr. Paramesh H, a paediatric pulmonologist who had spent decades trying to popularise epinephrine as an emergency response medication. We strongly believe that the James Dyson Award will be our stepping platform to get recognised, educate and mass materialise our lifesaving innovation.”