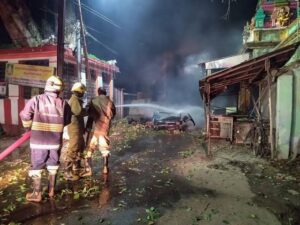 The Tamil Nadu police and National Investigation Agency (NIA) are continuing raids across the state in connection with the Kovai blast. Sources in the Coimbatore city police said that for the past ten days, more than 100 places have been raided in the city and suburbs. Surveillance of many people who were indirectly involved in the blast is also continuing. Meanwhile, the NIA has conducted raids and searches on residences of the seven who were involved in the blast. Firoz Ismail, one of the arrested under the Unlawful Prevention Prevention Act (UAPA) charges, was deported in 2019 by the UAE government following his connection with Islamic States (IS) during his stay in that country.