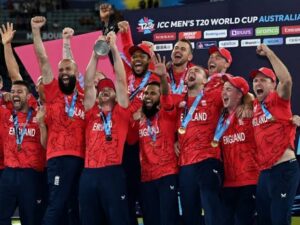 Ben Stokes and Sam Curran starred as England edged Pakistan by five wickets to win the Twenty20 World Cup today.
Jos Buttler, England captain, said, It is (the icing on the cake). To win the T20 WC now, immensely proud of everyone here. It has been a long journey and few changes but we are reaping the rewards of how we have played in the last few years. It’s been a fantastic tournament. We went to Pakistan before coming here, which was a valuable time for the group and this felt a long way after the Ireland match but the character we showed from thereon in must-win games is amazing. He (Matty Motts) has fitted in really well. We have got a few Australians in the coaching staff with us in this tournament and he has led the coaching staff really well, gives the players great freedom. Huge swing in the game, that was a fantastic over from Adil. He has been outstanding for us in the last three games, just the guy who makes things happen and his performance was outstanding. When you hit the right length there was a little bit of movement and they were obviously bowling at a good pace, not easy at all. We managed to get away to a start which controlled the run-rate and we bat deep as well. And that man again, Ben Stokes is there at the end. He is the ultimate competitor in anything he does and has the experience to bank on as well. He timed it perfectly, the impetus that he and Moeen Ali had just took it away from Pakistan.