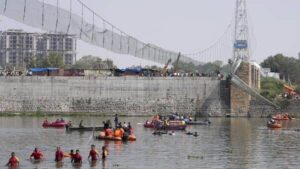 The ruling BJP is set to retain Morbi, where more than 130 people were killed in a horrific bridge collapse on October 30.
The BJP’s Kantibhai Amrutiya, a five-time MLA, is heading to a victory in the constituency that has been in the spotlight since the bridge tragedy, in which the local administration was blamed for violating rules while hiring a private company for repairs and maintenance.
Amrutiya has a lead of over 16,000 votes over his Congress rival Jayantilal Patel. The Aam Aadmi
(AAP)’s Pankaj Ransariya, who targeted the BJP over the lapses leading up to the bridge tragedy, is at number three.
The colonial-era bridge collapsed days after it reopened following seven months of maintenance by Oreva, a company that is primarily known as a watch maker.