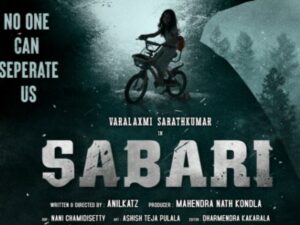 The shooting of Sabari, the upcoming Tamil film starring actor Varalaxmi Sarathkumar in the lead role, has been wrapped up, the makers announced on social media.Directed by Anilkatz, the makers have announced that the film will be made in Telugu, Malayalam and Hindi, as well. Expected to be a psychological thriller, the film will also star Ganesh Venkatraman, Sashank Siddhamsetty, Mime Gopi, in prominent roles.The technical crew of Sabari consists of Gopi Sundar as the music composer, while Nani Chamidisetty will serve as the cinematographer. Shot across Hyderabad, Visakhapatnam, and Kodaikkanal,  Sabari is bankrolled by Mahendra Nath Kondla through Maha Movies, while Maharshi Kondla will be presenting the film.