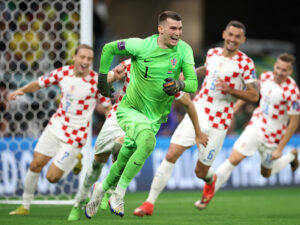 Doha, Dec 10: In one of the most dramatic ends to the FIFA World Cup game in this edition, Croatia defeated Brazil on penalties to qualify for the semi-finals of the tournament. After the match remained goalless at the end of 90 minutes, it was Neymar who broke the deadlock in the first half of extra time to give Brazil the lead in the game. However, the euphoria didn’t last long as Bruno Petkovic slotted in the equalizer with three minutes remaining from the whistle. In the penalty shootout, Rodrygo missed the first penalty for Brazil while Marquihos missed the decisive won, while Croatia slammed all penalties home to win 4-2. Neymar — who left the pitch in tears — had fired Brazil into the lead at the end of the first half of extra-time, working one-twos with Rodrygo and Lucas Paqueta before rounding goalkeeper Livakovic to score. But it did not break Croatia’s resistance as the 2018 World Cup finalists hit back to level. Brazil had never played with the same attacking flair as in their last-16 win over South Korea. Croatia were as obdurate and difficult to break down as ever, and they have now gone to extra time in eight of their last nine major tournament knockout matches, with the exception being their defeat to France in the World Cup final four years ago. It was never going to be easy for Brazil to play with the same freedom and joy as in their demolition of South Korea, when they celebrated their goals with choreographed dance moves that seemed to upset some onlookers.