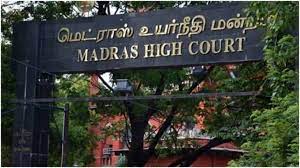 Chennai: The Madras High Court has dismissed at the admission stage itself, a Public Interest Litigation (PIL) seeking a direction to the Tamilnadu government to adopt the NCERT syllabus for State Board schools too and scrap the existing Samacheer Kalvi (Uniform Education) system.

In his plea, the petitioner P A Joseph, representing yet to be registered JJ Party, contended that the Samacheer Kalvi was not helping students to clear the competitive examinations like the NEET, IIT-JEE and Common Law Admission Test (CLAT) and favoured adopting of the NCERT syllabus.

Refusing to entertain the plea at the admission stage itself, the First Bench of Chief Justice Munishwar Nath Bhandari and Justice D Bharatha Chakravarthy held that it was for the government to decide the right kind of school syllabus.

The court could not decide on it, the Bench said and added that the petitioner had not cited any provision of law which mandates that State governments follow only the NCERT syllabus.

The CJ asked the petitioner whether there was any rule or provision mandating the state to follow the NCERT syllabus. ‘We cannot run the government. The courts are not meant for that. If you show any provision that allows us to pass directions to the state to adopt the NCERT syllabus, we could pass directions on that. Otherwise, we would dismiss it with cost,’ the CJ observed and dismissed the PIL.

The petitioner pointed out that Samacheer Kalvi (uniform syllabus) was in vogue in State Board schools since 2011 when multiple boards such as matriculation, Anglo Indian and so on were abolished.

However, schools affiliated to the CBSE alone had been following the NCERT syllabus in the State. This had created a huge disparity among students pursuing their education in State Board schools and those admitted to CBSE schools, he said.