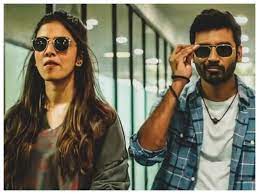 After making heads turn with Dhuruvangal Pathinaru, Karthik Naren has took to a different genre in Maaran. It is about a bravado journalist Mathimaaran (Dhanush), who takes on a corrupt politician Sathiyamurthy ( Samuthirakani,). He exposes the politico’s attempt to hack EVMs ahead of by-polls. Little Maaran forgot was about his sister Smruthi Venkat. Maaran Meanwhile, romances a photo journalist in his office, played by Malavika Mohanan.

Dhanush is at his best. He sparkles and provides right energy. At his ease in stunt sequences, he also portarys emotions well. It is his third OTT release after Jagamae Thanthiram and Atrangi Re. Malavika Mohanan is cool and bubbly. Samuthirakani plays a regular villain. Illavarasu, Kayaprakash and Ramki, are adequate. Ameer plays a cameo. Music by GV Prakash is good.

An action-packed. Entertainer with sister-brother emotion, Maaran is a decent entertainer.