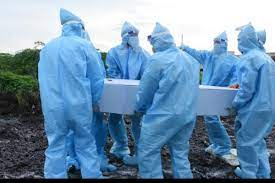 Washington: Some 18 million people across the globe may have died in response to the Covid pandemic — three times the number previously reported by the WHO, as per a new Lancet study.

Researchers at the University of Washington’s Institute for Health Metrics and Evaluation (IHME) set out to measure something called “excess mortality” — the difference between the number of deaths during the first wave of the Covid pandemic and the number of deaths that would have occurred in its absence.

Their study says its estimates indicate that “the full impact of the pandemic has been much greater than what is suggested by official statistics.”

IHME researchers surveyed 191 national and 252 subnational locations to get a picture of excess deaths between January 2020 and December 2021.

The study revealed that the global excess mortality rate across all age groups was 120.3 deaths per 100,000 people.

The countries of India (4.7 mn), the USA (1.13 mn) and Russia (1.07 mn) saw the highest numbers of excess deaths. They were followed by Mexico, Brazil, Indonesia and Pakistan. Even in wealthy industrialised countries, Covid deaths have been hard to keep track of.

For example, when a person in a nursing home died of Covid near the start of the pandemic, sometimes they were recorded as dying of other causes than Covid in official statistics. But they’re nearly impossible to quantify in countries where the government hasn’t kept track of deaths at all.

“Around 50% of countries in the world either did not have registration systems set in place or did not log information,” said Dr. Haidong Wang, the IHME professor who led the study.

Wang and his team used the weighted average of six different predictive statistical models designed to control for oddities like heath waves and lags in data registration to obtain estimates for these countries. This method produced staggering results.

Certain states in the US, like Mississippi, had an estimated excess death rate two times higher than India, one of the nations hit hardest by the Covid pandemic. But the rate of excess deaths caused by Covid accounts for the number of deaths across all age groups and the total size of country’s population. India is a young country with a large population relative to Mississippi.

This contributes to a comparatively low excess death rate. So, when we compare that with some national level estimates elsewhere, India’s excess mortality rate is not as high, said Wang. Studies like the IHME’s help us understand the wider impact of the pandemic, Nikos Kapitsinis said. He studies the underlying factors of excess mortality at the University of Copenhagen.

When interpreted alongside Covid response methods, the data show among all factors impacting excess mortality, a country’s capacity to “test, trace and isolate” — test for Covid cases, trace infections and isolate those who come in contact or are infected with Covid — was the most critical, said Kapitsinis.

South Korea’s excess mortality rate was 4.4 per 100,000 people in Wang’s study, well below the global average. This may be because South Korea committed to the test, trace and isolate strategy early on after a super spreader event in February 2020, A $8,000 fine was imposed for those who did not isolate.

What appeared to happen in real time is high income countries were being affected most by Covid, when the reality was those countries had testing capacity to show the impact of Covid in real time, said Dr Oliver Watson, a visiting researcher at the Imperial College London.