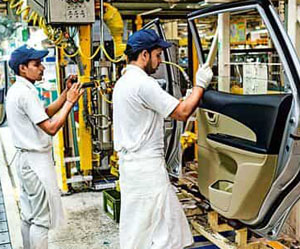 Mumbai : The Reserve Bank on Friday slashed economic growth projection to 7.2 per cent for the current fiscal from 7.8 per cent estimated earlier amid volatile crude oil prices and supply chain disruptions due to the ongoing Russia-Ukraine war.

However, the central bank asserted that it will use all available tools to defend the Indian economy.

After referring to the pandemic situation and efforts taken by the central bank, RBI Governor Shaktikanta Das said, ”now two years later, as we were emerging out of the pandemic situation, the global economy has seen tectonic shifts beginning 24th February, with the commencement of the war in Europe, followed by sanctions and escalating geopolitical tensions”.

‘Once again, we in the RBI stand resolute and in readiness to defend the economy and navigate out of the current storm,’ he added.
Unveiling the first bi-monthly monetary policy review of the current fiscal, the Governor said external developments during the past two months have led to the materialisation of downside risks to domestic growth and upside risks to inflation.

Earlier this year, the Economic Survey in January had projected a growth rate of 8-8.5 per cent for the current fiscal.

‘We are confronted with new but humungous challenges — shortages in key commodities; fractures in the international financial architecture; and fears of deglobalisation. Extreme volatility characterises commodity and financial markets. While the pandemic quickly morphed from a health crisis to one of life and livelihood, the conflict in Europe has the potential to derail the global economy,’ Das said in his monetary policy statement.

Caught in the cross-current of multiple headwinds, the RBI’s approach needs to be cautious but proactive in mitigating the adverse impact on India’s growth, inflation and financial conditions.
The RBI Governor said with the easing of restrictions, domestic air passenger traffic rebounded in March.

”According to our surveys, consumer confidence is improving and households’ optimism in outlook for the year ahead has strengthened with an uptick in sentiments.” He said the business confidence is in the optimistic territory and supportive of revival in the economic activity.

Going forward, robust rabi (winter crop) output should support the recovery in rural demand, while a pick-up in contact-intensive services should help in further strengthening urban demand, he added.

The RBI on Friday kept the benchmark interest rate, repo — at which it lends short term money to banks — unchanged at 4 per cent. After a deliberation during April 6-8, the six-member Monetary Policy Committee (MPC) headed by Das also decided unanimously to remain with an accommodative stance.

Asserting that the RBI is not hostage to any rule book, Das said it will use all available tools to defend the Indian economy. He said the RBI will focus on the withdrawal of accommodation to ensure that inflation remains within the target going forward while supporting growth.

Retail inflation is hovering above the RBI’s upper tolerance level for the past couple of months. It was 6.07 per cent in February and 6.01 per cent in January, mainly due to an uptick in food prices.

‘Overall, the external developments during the past two months have led to the materialisation of downside risks to the domestic growth outlook and upside risks to inflation projections presented in the February MPC resolution. Inflation is now projected to be higher and growth lower than the assessment in February,’ the RBI said.

Even as the economic activity is recovering, it is barely above its pre-pandemic level, Das noted.

Noting that private consumption and fixed investment — the key drivers of domestic demand — have remained subdued, with the only marginal rise from pre-pandemic levels, the RBI said that on the supply side, the contact-intensive services still trail the levels of 2019-20.

‘Nevertheless, the Indian economy is steadily reviving from its pandemic-induced contraction,’ the Governor said.

However, he also pointed out that due to the excessive volatility in global crude oil prices since late February and the extreme uncertainty over the evolving geopolitical tensions, ‘any projection of growth and inflation is fraught with risk,’ and is largely contingent upon future oil and commodity price developments.