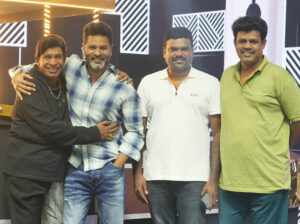 The motion poster of Suraaj’s Naai Sekar Returns was released a few months ago leaving fans of veteran comedian Vadivelu elated. The film is the spin-off of the director’s 2006 movie Thalai Nagaram in which Vadivelu essayed the popular role Naai Sekar.

However when makers of a project starring Sathish in the lead had registered the title earlier they announced Naai Sekar Returns as the title for the Vadivelu-starrer.

The team has now come up with a surprise news for movie buffs. Actor-filmmaker-choreographer Prabhu Deva has been roped in to helm dance choreography for one of the songs in the movie.

They also released a picture from the location where the song is being shot.

Lyca Productions is bankrolling Naai Sekar Returns which has music composed by Santhosh Narayanan. Sivaangi Krishnakumar Redin Kingsley Shivani Narayanan Anandaraj Munishkanth and Rao Ramesh among others essay pivotal roles in the movie which has editing by Selva RK.