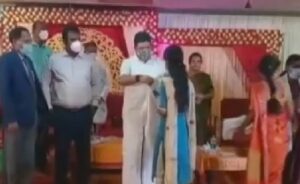 Chennai: The Dean of the government medical college in Madurai has been transferred and put on ‘compulsory wait’ for allowing first-year students to take an oath in Sanskrit instead of the traditional Hippocratic Oath.

Sources said that medical students had taken the English translation of the Sanskrit oath ‘Charak Shapath’ during their induction ceremony on Saturday. The Dean claimed that the students took the oath on their own.

The event, attended by two state ministers — Finance Minister Palanivel Thiaga Rajan and Commercial Taxes Minister P Moorthy – had triggered a controversy, coming as it did amidst an already brewing language row and DMK government’s tensions with the Centre.

As visuals of students taking the Sanskrit oath were widely publicised, the State government ordered the removal of Dean A Rathinavel, saying he was being placed on a waiting list for future posting.

Health Minister M Subramanian said, ‘I have attended the oath-taking ceremonies in Tiruvallur, Nilgiris and a few other colleges where students took the Hippocratic Oath. That is the practice in Tamilnadu. Who gave anyone the permission to change this long-held tradition? How can a language which people don’t even know how to pronounce be used by students?’

The government’s statement also clarified that forthcoming functions at medical colleges and hospitals should ensure the Hippocratic oath is followed.

The National Medical Commission (NMC) had recently recommended that the Hippocratic Oath be replaced with the ‘Maharishi Charak Shapath’.