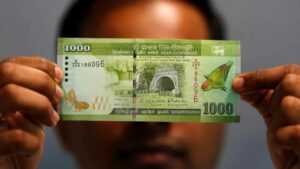 Colombo : Sri Lanka’s Central Bank on Thursday decided to substantially decrease the limit of foreign currency a person can hold in his possession to $10,000 from $15,000 as the forex crisis has led to limited imports with no gasoline in filling stations in the country facing the worst economic crisis. Central Bank Governor Nandalal Weerasinghe said that under the Foreign Exchange Act, there is a limit anyone can hold foreign currency, which used to be a value of maximum $15,000, Lanka 1st news website reported.

Stating that the apex bank is looking towards bringing it down to $10,000, the CBSL Governor said that even with that $10,000, proof of how the person came to possession of the relevant funds must be presented. Accordingly, a grace period of two weeks will be given to current holders to deposit this money either in their foreign currency accounts in the banking system or surrender that money and convert them to rupees and keep them in rupees, he added. Sri Lanka, near bankruptcy, has suspended up to $7 billion of foreign loan payments due to be repaid this year because of a foreign currency crisis.

The country must repay $25 billion as foreign debt by 2026 out of a total $51 billion. It has led to limited imports with no gasoline in filling stations. Other fuel, cooking gas, medicine and foods are in short supply, forcing people to stay in long lines to buy the limited stocks. Amid fuel crisis, Energy Minister Kanchana Wijesekera said that posts shared on MPs being given subsidised fuel rates are false. No MP from either side or anyone has been given subsidised rates than the current market prices given to the public, he tweeted.

Further, the Minister said he instructed the Ceylon Petroleum Corporation to carry out an investigation on the rates displayed in the dispenser at the police garage and will make a statement in Parliament. No one will be extended privileges on fuel stations other than ambulance essential services, he further tweeted. In his statement to Parliament, the Minister said the Ceylon Petroleum Corporation has never sold fuel to any MPs at a price less than the market rates, on any occasion. You (Speaker) has requested the Inspector General of Police over the possibility of providing fuel for MPs to visit Parliament during the days that Parliament convenes, he told Parliament.

He said following the Speaker’s request to the Inspector General of Police, the Ceylon Petroleum Corporation has made it clear to sell Petrol for Rs. 334.19, Auto Diesel for Rs. 289.13, upon payment made by cash. The minister also said that filling stations are only permitted to sell fuel subject to the present conditions, which is a maximum of Rs. 8,000, except for vehicles engaged in transportation services. The rate of Rs. 121 is what existed several years ago, he told Parliament, adding that the said filling station was instructed to stop selling fuel upon payment by cash. Further, Energy Minister Wijesekera said an investigation will be carried out for not updating the said gasoline pump or the dispenser.

Sri Lankan authorities have decided to suspend the issuing of fuel from the Narahenpita Police Transport Division for selected vehicles following public outcry. The Ceylon Petroleum Corporation on Thursday said that it stopped selling fuel to parliamentarians from the Narahenpita Police Transport Division’s filling station after reports emerged that fuel was being sold at subsidised rates.