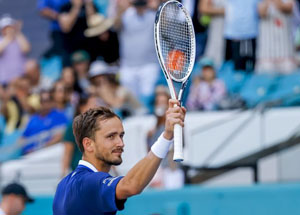 London : Daniil Medvedev will not sue Wimbledon over the tournament’s ban on Russian and Belarusian players but admitted “there are a lot of mistakes” behind the controversial decision.

Players from the two nations have been banned from taking part in the season’s third Grand Slam event which starts next month following the invasion of Ukraine. However, they are allowed to keep playing at other tournaments including the French Open which gets underway in Paris on Sunday.

If I can’t play, I’m not going to go to court for this one, 26-year-old world number two Medvedev said Friday.
I don’t know what ATP is going to do, I’m waiting for their decision. But yeah, me personally, I won’t go to court.
He added: Maybe it’s the government pushing them (Wimbledon), maybe it’s their decision.

There are a lot of mistakes behind this. The ATP, which runs the men’s tennis tour, is understood to be close to making a ruling on the Wimbledon controversy. Both the ATP and WTA could decide to strip the high-profile tournament of ranking points in response to the ban.