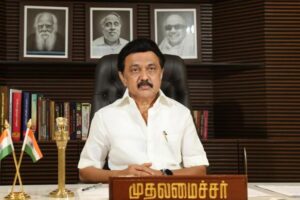 Chennai: Tamilnadu Chief Minister M K Stalin hit out at opposition parties for their ‘publicity-seeker’ jibe aimed at him and asserted that he is in politics for over 5 decades and does not need publicity.

Slamming the opposition, the Chief Minister said they criticise him saying ‘Stalin is a publicity seeker’. Stalin asked, “why do I need publicity? I am in politics for 55 years. Why do I require publicity after so many years?”.

Addressing the gathering after inaugurating new projects here, Stalin said the DMK regime led by him has fulfilled about 70-80 per cent of promises made to the people ahead of the 2021 Assembly election.

However, those in the opposition and some smaller parties are claiming that the DMK government has not honoured any of its electoral assurances, he said. The AIADMK and the BJP are the parties that are apparently targeted by the Chief Minister.

Referring to Ranipet District based government initiatives, he said welfare assistance is facilitated to as many as 71,103 beneficiaries under various departments and it includes installing solar powered farm pumps, housing initiatives, medical insurance, providing goats and so on. About 70-80 per cent of all electoral assurances have been fulfilled in the state and besides such achievements, the government is also implementing a slew of other projects.

Listing out his government’s overall achievements, he said such initiatives were not announced ahead but taken up and completed in a year. When this was the case, the opposition is make empty accusations.

Alluding to the publicity-seeker remark, Stalin said it was based on his visit to ‘Narikoravar’ and ‘Irular’ households, where he ate food with them. “Did I keep quiet after visiting them and conclude that my duty was over with the visit,? he asked.

Tags:Tamilnadu Chief Minister M K Stalin hit out at opposition parties for their ‘publicity-seeker’ jibe aimed at him and asserted that he is in politics for over 5 decades and does not need publicity.