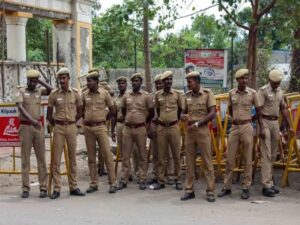 The Tamil Nadu state Intelligence Department and police’s elite ‘Q’ Branch are on high alert after the Intelligence Bureau apprehended an alleged ISIS operative from Salem on Sunday. The arrested, identified as Ashik, was working in an anklet-making unit of his relative. The Intelligence Bureau picked him on Saturday morning, quizzed him for 10 hours and then handed him over to the police. He was produced before a court early on Sunday. Police claimed that Ashik was in touch with IS operatives for the past year and would likely have become a “lone wolf” attacker.With the arrest of Ashik and unearthing of the contacts he had maintained with the IS operatives from across the sea, the state intelligence and the ‘Q’ Branch have jointly stepped up the probe in the state.