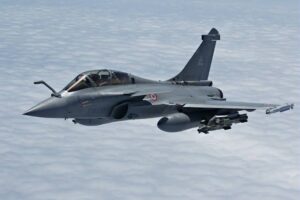 A French Air and Space Force contingent, including three Rafale jets, made a strategically crucial stopover at the IAF’s Sulur base in Tamil Nadu as part of a mega military operation it carried out in the Pacific Ocean.

The support provided by the Indian Air Force to the French force reflected the implementation of the reciprocal logistics support agreement signed by France and India in 2018 to boost military cooperation.

A French readout said on Thursday that the cooperation with the Indian Air Force demonstrated a high level of mutual trust and interoperability between the two sides.

It said the French contingent was hosted for a technical stopover at Air Force Station Sulur on August 10 and 11 during a long-distance deployment from metropolitan France to the Pacific Ocean.

The French Air and Space Force is carrying out a major long-range mission in the Indo-Pacific, code-named Pegase 22, from August 10 to September 18.

“The first stage of this mission aims to demonstrate France’s capacity for long-distance air power projection by deploying an Air Force contingent from metropolitan France to the French territory of New Caledonia in the Pacific Ocean in less than 72 hours (10th-12th August),” the statement said.

“To achieve this unprecedented 16,600-km deployment, the Air Force contingent made a technical stopover in India, at Air Force Station Sulur,” it said.