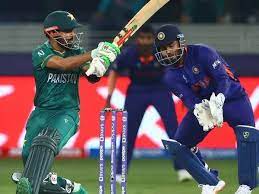 Chennai: All eyes will be in Dubai tomorrow as arch rivals India, and Pakistan meet each other in the Asia Cup T20 encounter. The two teams lockhorn for the first time after Pakistan thrashed Team India by ten wickets in the World Cup T20 match at the same venue few months ago.

Pakistan sailed into the semifinal of the World Cup but they bowed out after a loss against Australia. India, since the loss have pulled back their consistency. They remain unbeaten in seven bilateral series. This run includes wins over New Zealand, West Indies — twice, Sri Lanka, Ireland, and England while sharing the honours with South Africa. India’s stellar run coupled with their number one ranking in T20Is has made them a front runner to lift this year’s Asia Cup.

For Pakistan, Babar Azam will be the key. Babar is the number one ranked T20I batsman in the world. He has been the most consistent batsman in all formats of cricket too. But absence of injured Shaheen Afridi is a cause of concern for Pakistan. He wrecked havoc in India’s top-order in the last encounter between two teams.

For India, Kohli will be itching to put his poor form behind him. It has been over 1000 days since Kohli notched his last international hundred.

Tags:All eyes will be in Dubai tomorrow as arch rivals Indiaand Pakistan meet each other in the Asia Cup T20 encounter.